Introduction
Pork production around the world depends on identifying sows in estrus, successful mating and farrowing large litters of pigs per litter. Any tools that might improve farrowing rates and litter size are desirable in order to attain improved reproductive performance. In modern pig breeding, the use of carefully timed artificial insemination is crucial to producing a healthy fast-growing herd of top-class pigs. The tool described in this study is a phermone spray. By using a pheromone spray, The costs of maintaining a boar are removed, time and labour are saved in testing for estrus. This helps the farmer to breed financially competitively.
Most pig breeders around the world and in South Africa use teaser boars to help gilts (female pigs that have not yet bred) develop and to identify sows in estrus. Teaser boars are used in part to spread pheromones near gilts and sows. They also provide visual, auditory and tactile signals to the females. The effectiveness of pheromones has been discussed in the scientific literature since the 1950’s. In the 1960’s, Patterson [1,2] reported that boar saliva contained 2 steroids that act as boar pheromones that stimulate sow reproduction. In behavioral tests, these steroids improved the percentage of weaned sows or gilts that express sexual behaviors, but not as much as a live boar [3]. The single odorous molecule androstenone has been sold as a commercial product to stimulate sow behavior and reproduction for several decades. McGlone et al [4] reported in 2019, that a mixture of androstenone, androstenol and quinoline induced sexual behaviors in weaned sows. The same authors were able to show an increase in number of pigs born alive and total pigs born per litter when the pheromone mixture was used on 12 commercial farm sites in a study using about 4000 sows.

Servistim contains a mix of the pheromones Androstenone and Androstenol in an alcohol base. These are natural compounds responsible for the stimulation of sexual responses in the female pig – both before and during natural mating or artificial insemination. The Servistim pheromone spray was developed to help farmers to fully optimise the process of pig breeding. The aim of the Servistim pheromone spray is to increase a sow’s annual productivity, to take the guesswork out of timing estrus, and to reduce the number of empty days. Empty days or missed heats are an unwanted expense in extra feed and lost production costs. Furthermore, using a pheromone product instead of a boar is considered to be clean, green and ethical technology [7] that can improve pork production sustainability and reproductive success.
In short, pig breeding with artificial insemination and Servistim will aid a pig farmer to be financially competitive, and to produce a healthy fast-growing herd of top- class pigs. However we need studies to scientifically validate the use of the Servistim pheromone spray product. This article describe such a study. We hypothesized that by replacing the teaser boar with Servistim pheromone spray, sows would have similar time to estrus and similar successful artificial inseminations and pregnancies as the traditional method using a boar. We approached several South African piggeries in order to carry out a study. In South Africa, many pig breeders are traditional in their methods and are reluctant to change their normal breeding procedures, or to introduce different products. For this reason, our study had to be undertaken using small groups, because farmers did not want to take big risks in changing their methods.

Aim
This study aimed to evaluate whether the Servistim boar pheromone alone can be used successfully for the artificial  insemination and reproduction of pigs. We also aimed to compare the process of using solely a boar presence or using the Servistim boar pheromone spray only, in order to stimulate estrus and to test for estrus by means of the standing reflex and back pressure tests. Our study was thus conducted as two projects.

Method
In project 1, small groups of sows and gilts were tested in trials totalling 92 sows or gilts. This project was undertaken at Amakhono Piggery artificial insemination training project and farm, an accredited training school situated between Heidelberg and Meyerton, Gauteng Province, South Africa. This study was undertaken between October 2019 and February 2021.
Sows and gilts were tested in 5 separate trials with the number of sows or gilts ranging in each trial from 14 to 26, depending on how many were available for each trial. In some cases the trial was carried out a second time on the same sow. In all of the five trials, there was no boar present at any stage and thus, no boar was used to detect estrus.
The protocol to stimulate estrus and to detect heat for each sow was as follows:
Each sow with a litter of piglets, would go through weaning on a Thursday. The following day, Friday afternoon at 17:00, the Servistim application protocol was begun with two to three spays on the snout near the nose. Thereafter, two to three sprays of Servistim were applied to the snout of the sow at 8:00, 12:00 and 17:00 every day for seven days or until testing positive . Estrus detection was also carried out at each of these times, but from the following week on the Monday, estrus detection was only tested for at 8:00 and 12:00 each day. When a sow tested positive for standing reflex, she was deemed to be in estrus and ready for insemination. By the following Thursday morning, all the sows had been successfully artificially inseminated, withthe exception of one sow that was inseminated on Thursday afternoon (six days after the sows were weaned).
All gilts and sows were inseminated according to standard protocols. For gilts the first artificial insemination was done 12 hours after the positive standing reflex test and followed by another 12 hours later. For sows, the first artificial insemination was done 24 hours after the positive standing reflex test and then repeated after 12 hours. However, all sows coming into heat anytime on from Wednesday morning (i.e. five days after start) were treated in the same way as gilts and inseminated after 12 hours on the Wednesday afternoon, with the second artificial insemination being done on the Thursday morning (a further 12 hours later).

Results
Animals (sows and gilts all referred to as sows in this section) were tested for estrus using the standing reflex and back pressure tests,. Table 1 shows how many were in estrus at each morning (8:00) or afternoon (12:00) session for the 5 trials (The application of the spray having begun on the Friday afternoon). By the following Tuesday afternoon at 12:00, 18 sows tested positive for estrus as they were in full standing heat. On Wednesday morning, an additional 38 sows were tested to be in estrus. On Wednesday afternoon at 12:00, 21 sows, Thursday morning 14 sows and the final sow on Thursday afternoon were in estrus.

Figure 1 is a graph depicting the number of sows in estrus for each trial at each time of day. The graph indicates that most of the sows showed standing reflex with the Servistim pheromone spray on the Wednesday morning following the Friday afternoon start. In each trial, the sows’ litters had been weaned by the end of Thursday and counting from the Friday afternoon start, it took on average 5 days for the peak number of the sows to be in full standing heat. It took between 4 days and 4 hours to 6 days and 4 hours for the sows to reach estrus using the Servistim pheromone spray. All the sows and gilts in this study tested positive for estrus and were all inseminated twice, with exception of one sow in trial 3 which came into estrus twice and was culled. The data for this sow was not deleted.

All the pregnancies in this project resulted in farrowing. The number of piglets born of each sow or gilt varied between 9 and 16 piglets per litter. 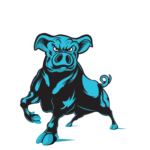 Method
In this study 199 sows were used to compare using a boar presence only to using the Servistim pheromone spray only, to stimulate estrus and to detect heat. This project was undertaken at a big piggery that has a 900 sow unit, Niemen Stud farm, an award winning piggery in Magaliesburg, Gauteng Province, South Africa. This study was undertaken between October 2019 and February 2021.
Boar presence only was used to stimulate estrus and detect heat in 125 sows, whilst 74 sows were tested using the Servistim boar pheromone spray
only. The protocol to stimulate estrus and to detect heat for each sow was as follows:
With the piglets having been weaned on a Thursday, all the sows (in both groups) were exposed to the boar from the following Saturday morning as they were housed in one building. On the Monday, the group being tested with the Servistim pheromone spray, was separated from the boar group, but still housed in the the same building but 30 metres apart. Two to three sprays of the Servistim pheromone spray were applied to the noses and snouts of the sows from Monday morning at 8:00, 12:00 and 17:00 every day. All the sows were tested for estrus at 8:00 and again at 12:00 each day. When a sow tested positive for standing reflex, she was deemed to be ready for insemination. All gilts and sows were inseminated according to standard protocols.
For gilts the first artificial insemination was done 12 hours after the positive estrus test and followed by another 12 hours later. For sows, the first artificial insemination was done 24 hours after the positive standing reflex test and then repeated after 12 hours. However, all sows coming into heat anytime on from Wednesday morning were treated as gilts and inseminated after 12 hours on the Wednesday afternoon with the second artificial
insemination being done on the Thursday morning (a further 12 hours later).

Figure 2 is a graph that shows that the peak number of sows in estrus occurred on Tuesday afternoon for the boar presence group of sows, whilst the peak estrus for the Servistim group occurred on Thursday morning, 1.5 days later.

Discussion
The results on the small piggery (Amakhono Piggery) and big piggery (Nieman Stud Farm) respectively, were very much the same. We attribute this to the fact that on the small piggery, to compensate for the total absence of a boar on the farm, the Servistim pheromone spray was applied to the noses and snouts of the sows from the Friday after weaning. Hence the time to estrus in project 1 was slightly faster. In project 2, when the Servistim pheromone spray was used from Monday onwards on the big piggery, time to estrus was still very much comparable to the group that was exposed to the boar only, apart from the fact that time to peak numbers of estrus lagged behind slightly. Although the Servistim sow group in project 2 was not introduced to the boar, the presence of the boar could possibly have had an affect on the sows for the Servistim trial, since both groups of sows were accommodated in the same building although about 30 meters apart. But as the time to estrus was similar to that in project 1, it is safe to say that having the boar in the same building did not make a significant difference.